I have been working toward my Chef certification here lately, and my husband came up with this really cool kata that I’ve been working on lately to study up for my first exam. A kata is something that you do over and over for training and for the purpose of bringing the broken parts of the process to light. It’s origins are in karate, and I’m sure you’ve heard of how it was implemented at Toyota with their famous Toyota-kata.

I really love this kata that Michael created because I can:

It’s been really good for me. It causes the things that I just don’t understand to really stand out so that I can focus on them a little more. So one of those things that kept getting me stuck was custom resources. For me, the documentation just wasn’t enough. So I’m going to explicitly explain this one custom resource that I had to make so that I can come back to this and remember. Maybe it’ll help some of you, too!

Why I wasn’t getting it

Here’s what the Chef docs say: 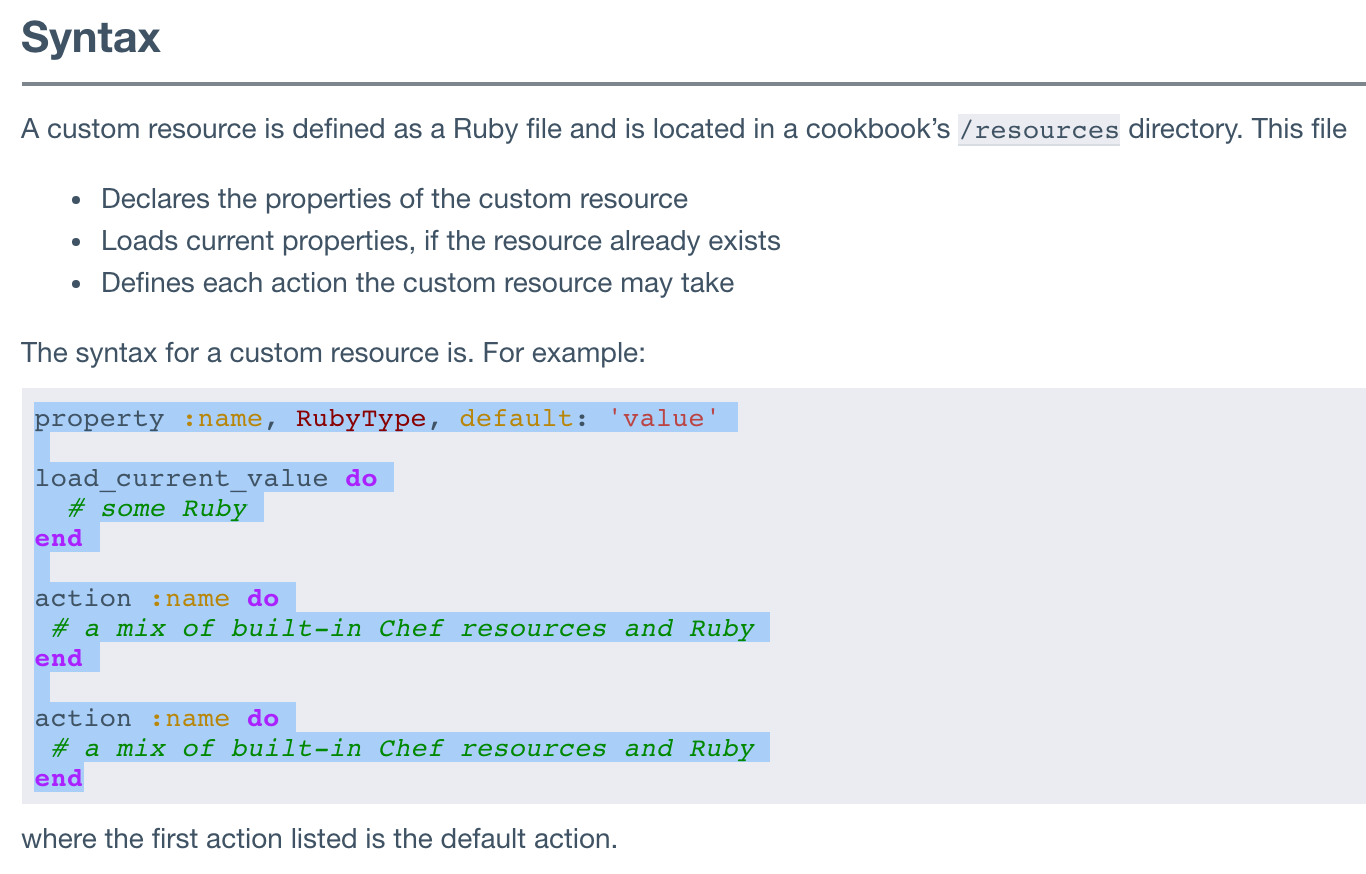 Honestly, when it all came down to it, I realized that I didn’t understand the documentation because I didn’t know the proper names for all of the parts of the resource. My understanding now of a very basic resource declaration is this:

Some of the tasks in the kata are:

Okay, so those first three tasks leave me with these two resources (note: I did change the repo that he gave as an example):

There are a couple of reasons we’d want to make a custom resource.

Sibling to my recipes directory, I created a resources directory. Within that, I created a Ruby file that was just for that one custom resource that I wanted to create. I called it chefkata.rb, and put this in it.

chefkata is the name of the resource that I called in my recipe after this was created.

kata_repo is the property, which is just like what command is in the execute resource (execute being the resource_name).

For example, these two resource calls are the same:

By omitting the path, which is the name_property for the directory resource, Chef will set the path property to /var/website because that’s what I set the name to. So really, each resource has a different default name_property that you can find in docs.chef.io.

After that was finished, I was able to then call that resource in my recipe, which looked simply like this:

As you can see, I substituted the name for the kata_repoproperty. I could have also written it like this:

I have to admit that the way resources are created doesn’t feel all that intuitive to me just yet. It could very well be that I just haven’t used Chef enough for it to be intuitive yet; that’s what Michael says, anyway. But that’s what this kata is for - to practice over and over until it is ingrained.