Y’all, I was in InSpec heaven a couple of weeks ago. I was on a project where I was supposed to create an InSpec profile that tests the build and application configuration of a set of servers within a pipeline in TeamCity - smoke-tests. I had to translate a bunch of ServerSpec into InSpec and run the InSpec profile independently of the cookbook. Seems easy enough, but the challenge is testing all of the different environments and using different tests for each node spun up. The client also wanted it to be in one step for all the nodes, not a different step for each one.

But first, if you’ve missed out on any of my tutorials, you can find them here:

So let’s say that you have two different roles that you want to test: database and webserver. And let’s keep it simple and just test one environment where you spin up one machine for each role.

That means that we’re going to need two different sets of tests:

If you’re following along in the practice InSpec profile, then you’ll see that there are three different sets of tests (well, really just one test in each control, but you get the picture.) We’re going to set it up so that we can run one test for each role.

Now, the big bummer of this is that attributes don’t work for InSpec in Test Kitchen just yet like they do for recipes, but I think that would be great if they did! (hint hint) Maybe sometime soon we’ll get that.

Let’s go over to our control and add the attributes hard-coded with a default value and see what it does. We’re going to declare the attributes above where we’re using them. So add this above your client control.

Use the attributes in an IF statement

Now that the attributes are declared, we’ll need to wrap our controls in an if statement so that it only tests that block when we want it to. Your client control block is going to end up looking like this:

You’re saying, “If the node you’re looking at is a client or base, then run this control block.” You’ll do the same for the server control:

What happens when you run it now? Well, nothing different yet, so let’s make that happen.

We’ll need to add a few attributes files to our profile to call on to change those roles. These are going to be yaml files, and while you may put them anywhere you want, I think it’s nice if they get their own directory inside of the profile. Go ahead and create these now. 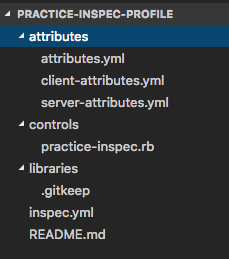 In each yaml, put the respective attribute values.

So then, let’s watch it run just the tests for only base and client by running:

See how it didn’t include the server only tests?

And now let’s watch it run the tests for just base and server roles:

See how it didn’t include the tests for client only?

And there you go! That’s a simple guide to attributes!

I love this feature. It gives a lot of flexibility and control, and you can use it in a lot of different ways. The trick is to hard-code the attributes first to make sure it’s working.

So just a little job update - I’m loving it over here at 10th Magnitude. I’m learning so much. Sure, I ask some dumb questions from time to time, and I feel really dumb about them later, but I am in the perfect position to learn a ton.